I woke up at around 3am. My parents had just arrived back from vacation, so we all got a chance to share our adventures from the past few days. My mom had a bit of an ordeal on her vacation as well, losing a memory card for her camera full of undownloaded pictures.

Today was exciting as it looked as if there would be a legitimate chance to chase storms in the area. This was exactly the type of day I was hoping for when I began planning this trip over four months ago. A cold upper level low would be approaching the central coast of CA this afternoon. Very cold air aloft would spread over relatively warm, moist air near the surface - and it appeared that hail and funnel clouds were possible in the western San Joaquin Valley. So I left Turlock at around 1:45pm to try intercepting developing storms to my south in the central San Joaquin Valley. But just before I arrived in Patterson, I learned of tornadoes that had just hit the Sacramento area. So I decided to go north after the Sacramento storms. These storms would be tough to catch since they were moving northwest away from me, and by the time I caught up with the storm near Arbuckle, the storm was dying out over the Coast Range.

Before long my attention was shifted from the weakening storm to this herd of cattle walked over towards me and started angrily staring and mooing at me....

After that strange bovine encounter, I dropped south to a new storm near Winters. I couldn't find a good place to get a picture due to trees and other obstructions while the storm was at its strongest, but was able to fire off a couple pictures between Winters and Davis as the storm began to weaken.

After that I drove back to Turlock, and picked up some dinner at In-N-Out....the fast food chain famous for criss crossed palm trees and a menu that consists entirely burgers, fries, and drinks. No potatoes, chili, or fruit salad here! 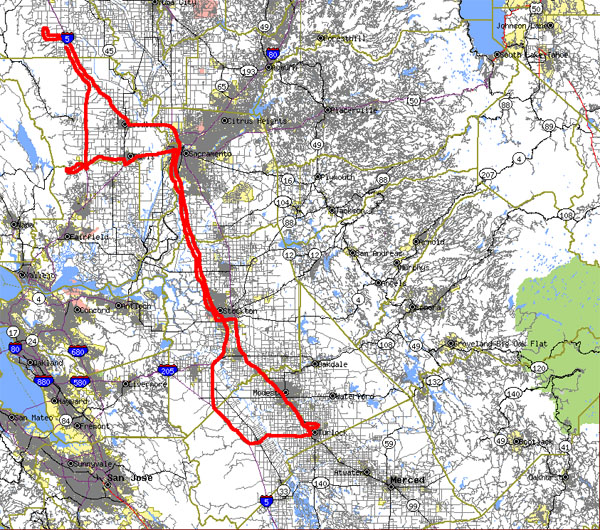